During late summer of 2011 ten artists from different disciplines and backgrounds met regularly at CeRCCa. The aim of the meetings was to develop joint projects and to establish a collaborative dialogue with the local community to generate meeting spaces of exchange. The audience was invited to actively participate, developing a relational perspective to the creative act. These relations were facilitated through the organization of presentations, actions, interventions and installations in the public space. The outcome of these processes culminated with Simbiòtic 2011, an event that took place in Llorenç del Penedès on the 7th and 8th of October 2011.

Simbiòtic 2011 was a project in residence at CeRCCa, organized by CRA’P - Pràctiques de Creació i Recerca Artística, and supported by the local magazine Portal Nou. The project was aided by the collaboration of the Municipality of Llorenç del Penedès, Espai d’Art Les Quintanes, El Centre, La Cumprativa, Parròquia Sant Llorenç, Escola Les Cometes, the youth association Patuleia, and the caterings Selma, Dolça Tradició and D’Itàlia.

Among the public activities that took place during these 2 days, there was a concert with the local choir Coral Hamonia led by Victor Turull, and a minimalist concert held at the local church by Jaume Muntsant (a.k.a. Nigul) based on different sounds recorded in the village. Simbiotic also included interventions in the public space by Jorge Horno with furniture made through recycled materials; a large oil painting made during a workshop with the kids of the school led by Arturo Lacal; a performative narration based on a possible history – both documented and fictional – of the village by Pei Hwee Tan and Francesc Torrent (La Vella Fam); an installation by Oriol Freixa aka Uri Green based on the wine as a symbol of the blood that runs through the veins of that region; an itinerary through the streets of the village searching the own limitations of the skin surface and the clown figure and dance as mediators by Diana Gadish.

For the last night of the event there was a closing party with the participation of local bands and associations. 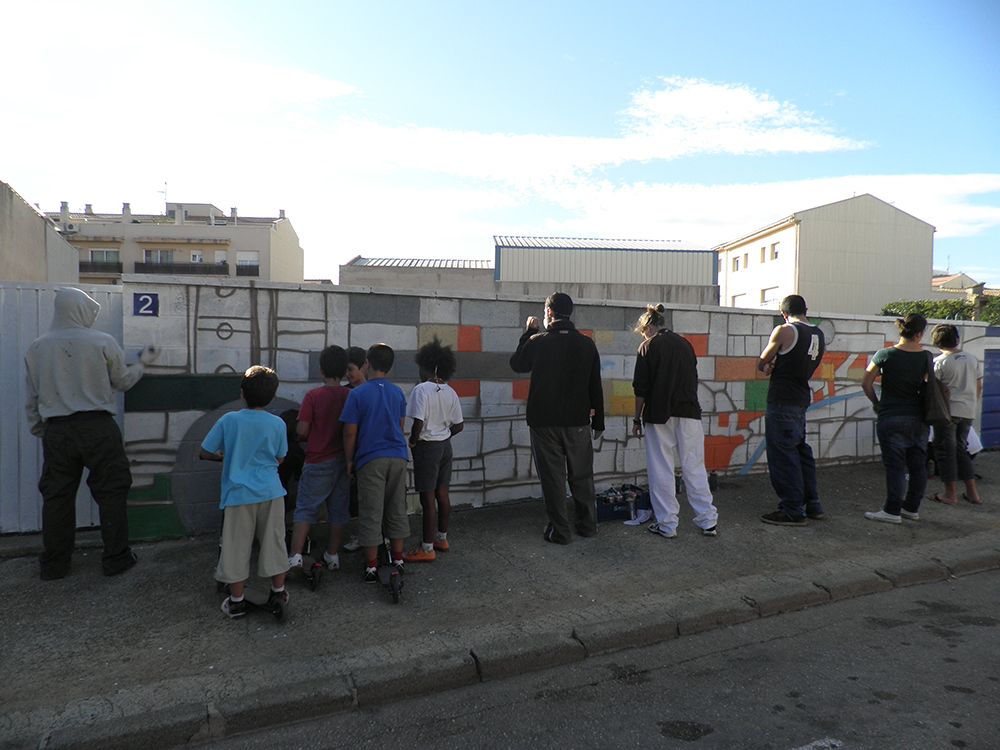 ‘Pintura Mural’ by Oriol Freixa (a.k.a. Uri Green)
A large mural painting made collectively with the locals. 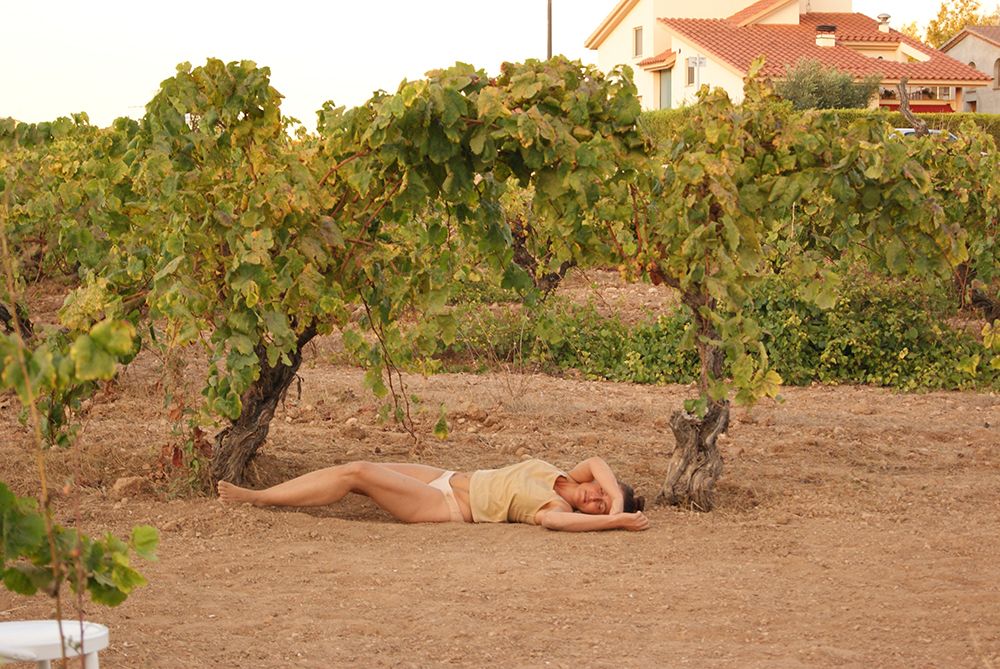 ‘The collective body’ by Zoe Balasch.
Performance intervention accompanied by cello music from the local musician Valenti Vall. The piece aims at rethinking the gaze towards the local landscape by establishing a direct dialogue between the soil and the vineyards. 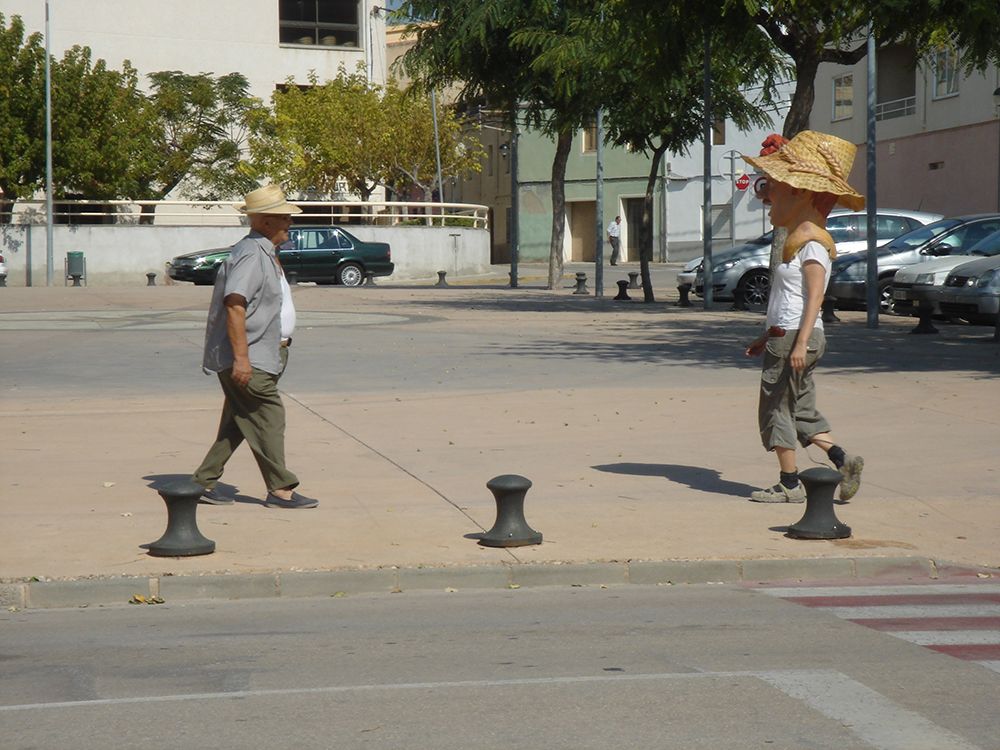 ‘Displacements’ by Esther Freixa.
Performance, photomontage and public projection that questioned the function of popular culture on the collective imagery using the Catalan tradition of ‘Capgrossos. 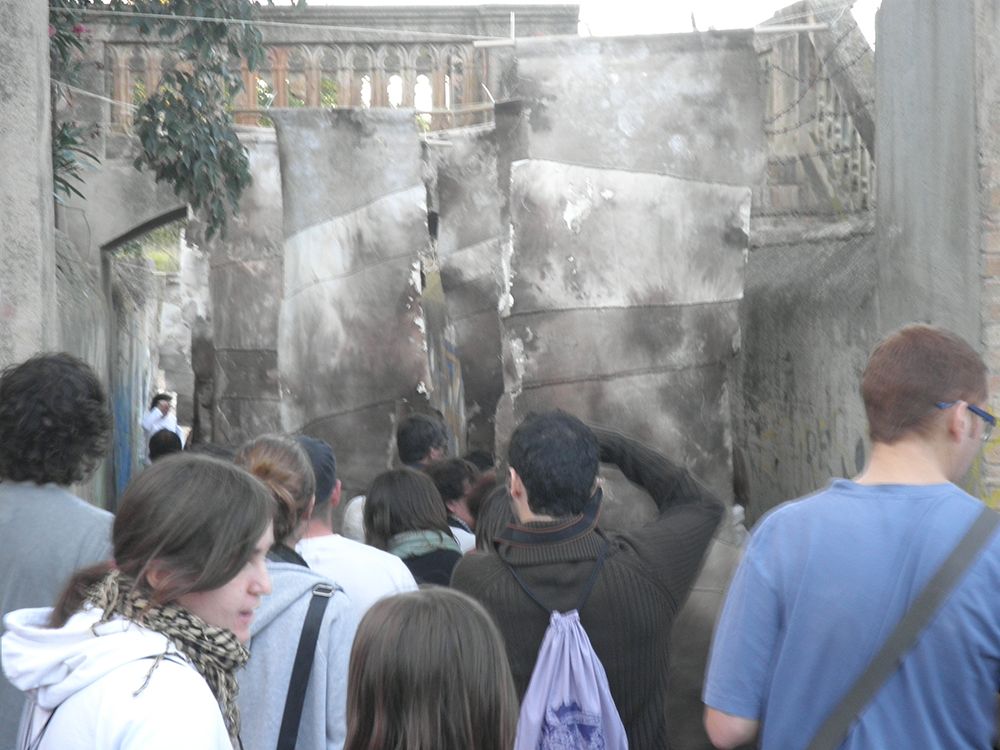 ‘Skins’ by Arturo Lacal.
Installation of skin fabric that was suspended at the outskirts of the village, creating a presence that interacted with passers-bys.