During July and August of 2012, CeRCCa reopened the old cinema of the village. Cal Marçal is a unique space of high historical and symbolic value. Opened in 1917, Cal Marçal first functioned as a café, dancing room and cinema. It was later converted into a school, and then a factory of toys, music boxes and lamps. It last served as a shop and sanctuary of exotics birds and reptiles. Closed to the public for more than 30 years, and thanks to the efforts of the owners of the space, the family Fontanals and CeRCCa, Cal Marçal reopened its doors during the main parties of the village, the Festa Major of LLorenç del Penedès, which takes place yearly between the 9th and the 13th of August. In its beginnings, Cal Marçal was a space that transcended established norms by introducing new forms of creativity and entertainment to the village, such as, ballroom dancing and cinema. The innovative nature of Cal Marçal was revitalized during the reopening, presenting a historical documentary and three artistic installations inspired by the history of the space. The documentary traced the history of Cal Marçal. Developed by Lourdes Guillén and Noemí Navarro, the project included the recovery of historical objects and photographs, interviews of the elderly that were part of the history of the old cinema, and the Marçal family tree.

The projects developed by Julie Laurin, Oreen Cohen and Cole Sternberg, were based on the reinterpretation of objects that marked the history of Cal Marçal such as chairs, toys, music boxes and cages.

The exhibition at Cal Marçal, Chairs, Toys, Birds, Memories, was a unique opportunity for the people of the village to rediscover this space unoccupied for more than 30 years, through the documentation of the history and the subjective interpretation of this same history. The opening of the exhibition took place on the 12th August, and was attended by more than 200 people. For the closing event, CeRCCa organized the projection of the film Cinema Paradiso, the 1988 Italian drama film written and directed by Giuseppe Tornatore.

Born in Montreal in 1985, Julie Laurin is a multidisciplinary artist working with sculpture, installation and performance. She completed her BFA at Concordia University in 2011. She has exhibited in Canada and abroad, and has participated in different artists collectives working in film, performance and public space intervention.

Julie Laurin adapted the old chairs of the cinema and dance floor. The chairs became witnesses of the hours of work and free time of the men and women of the village, as well as of the conflicts and dialogues amongst different sectors of the village community. Using sculpture, photography, video and performance the aim of Julie was to pay homage to these people.

‘The Release Of The Ashes’

The Release Of The Ashes was a participative performance organized by Julie Laurin and CeRCCa, in collaboration with the people of LLorenç del Penedès. The use of the chairs from the old theatre in LLorenç del Penedès as an artistic purpose was charged with meaning. The natural deterioration of the chairs was accelerated by the artist. Julie took the place of time desiring to catch up with the material by using sanding paper to polish and erode the chair day after day. The dust coming from the work of the artist over the chair was collected and meticulously kept on the awareness of its preciousness. This dust, vessel of a past life in Llorenç, witness of the leisure and labor of men and women of the town had to stay in Llorenç. In memoriam of the religious commitment of the village along with the important heritage of the culture of winery, a ceremony was held to release the dust from the chair into the vineyards. 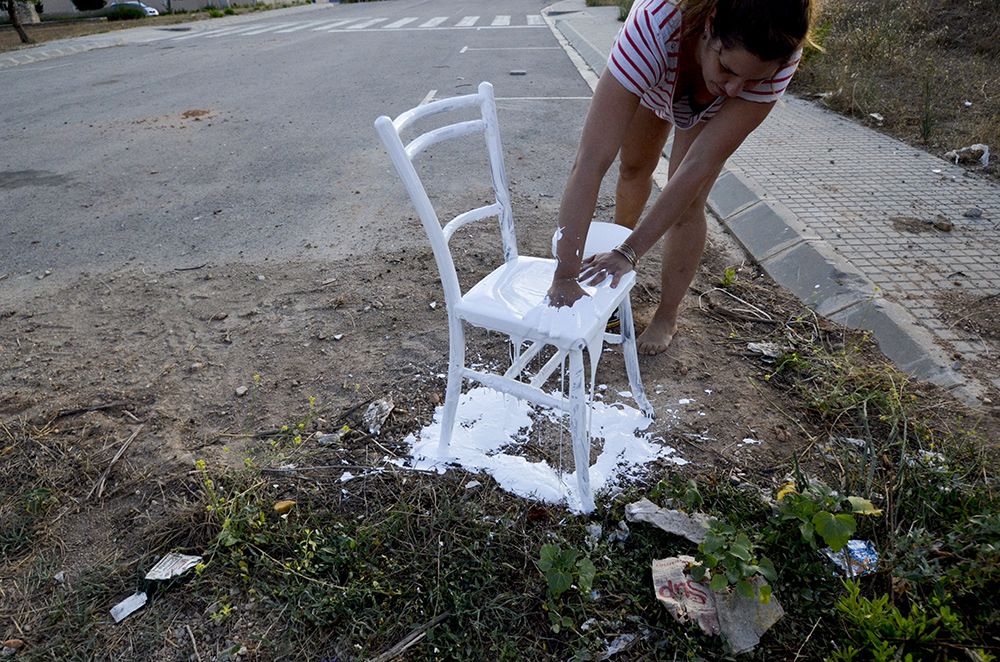 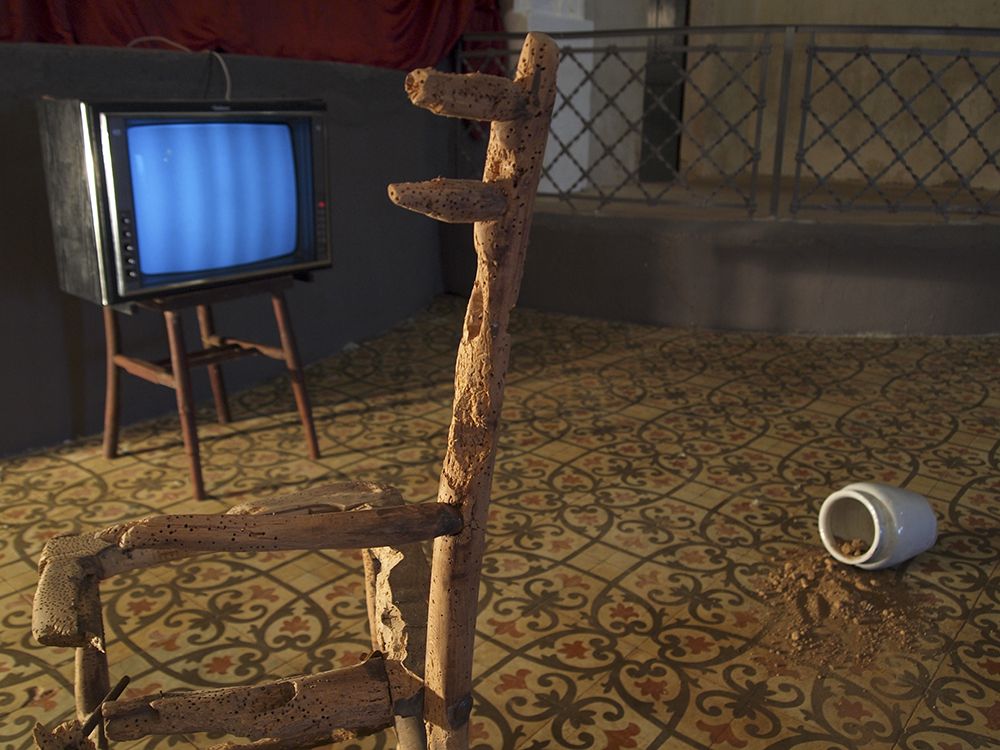 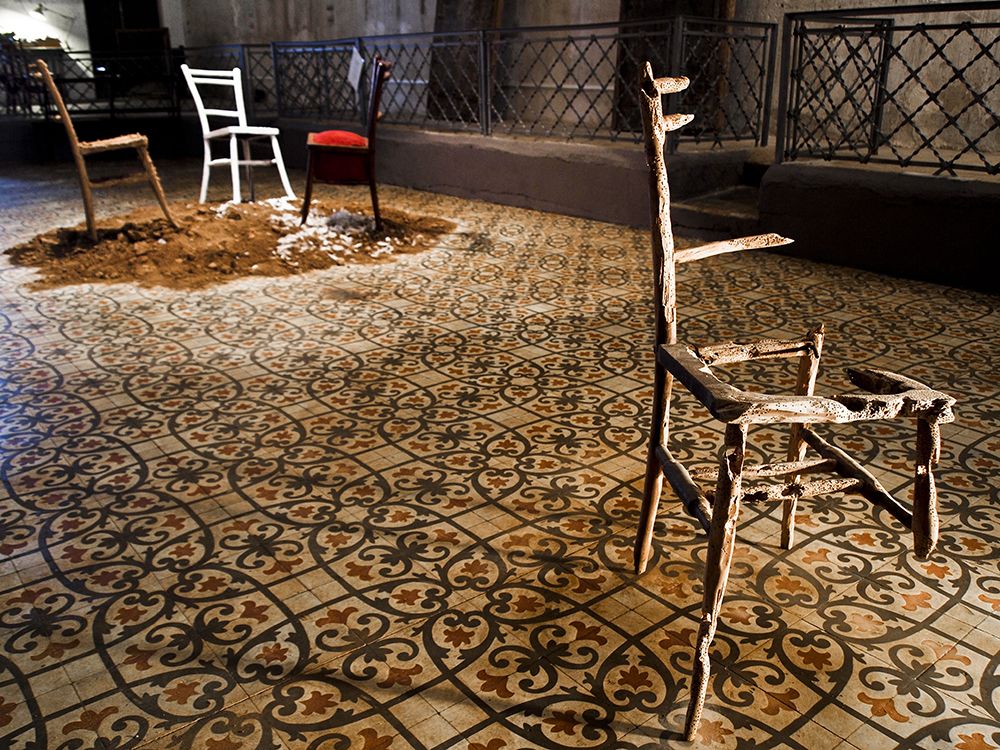 ‘I used the chair to pay a tribute to all the people who where ever in contact with. Like the insects that eat the wood, I accelerated the natural deterioration of the chair, continuing the dialogue between the chair and the human being, playing with the notion of time, in a society where everything goes faster. In memoriam of the commitment of the village the dust blended the precious soil, connecting the past, the present and the future wishing the new comes questioning and respecting all what we are.’

Oreen Cohen is a graduate art student at Carnegie Mellon University, Pittsburgh (U.S.A). She had several solo shows at Area 405 (Baltimore) and Transformer Gallery (Washington, DC), and numerous group exhibitions. In 2011, she was a recipient of a New York Foundation for the Arts Sculpture Fellowship. Cohen has participated in several residency programs in the U.S and abroad.

Project: The White Elephant that Dragged Spain into the Red

Oreen Cohen’s work is based in site-specific sculpture, installation and public art that investigates the potential of self and space. As an artist and resident from the Rust Belt Region, she poses a question and aims to answer it with her work: How can art contribute to a sense of local identity in light of our changing built environments?

Her installation at Cal Marçal transported viewers to the 1950’s when Cal Marçal, after being closed by the fascists, became a factory. Her installation, The White Elephant that Dragged Spain into the Red, was created by using the remains of machinery, lamps, toys, music boxes and tiles found in the cinema. Taking the action of cleaning as a metaphor, her installation reflected everyday life tasks.

She also connected with the landscape by doing performance work in the red dirt of the abandoned olive grove near the residency. In the work, White Wash, she raked the land, tiled the ground with white tiles and washed the floor with mud. In the work, Pedra Seca, she repetitively leapfrogged two stones across the field to recreate the laborious act of Pedra Seca wall building techniques on barren land. After the residency, she exhibited the video works at an International Film Festival, in Camaguey, Cuba. 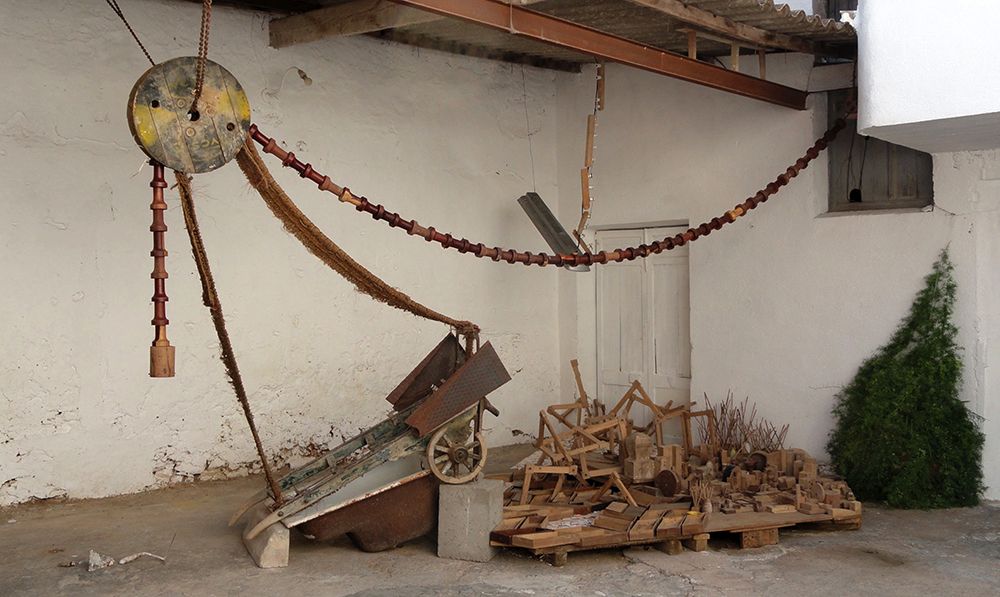 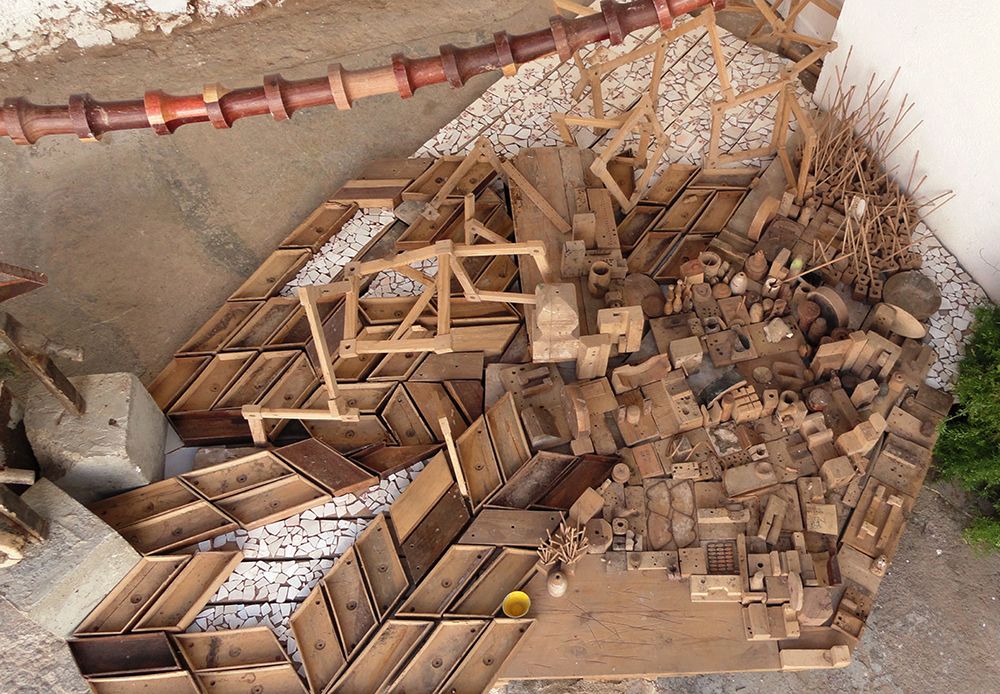 Cole Sternberg is an American visual artist. He has studied at Villanova University and the American University, Washington College of Law, J.D. His work has been featured in numerous exhibitions and publications worldwide. Sternberg’s works are chiefly in the medium of painting, but also photography, sculpture, installations and film. Series of Sternberg’s works have focused on a variety of social issues, from current human rights activism and it’s relationship to the law, to the environment, to the media and concepts of content overload. The works tend to be subtle or subversive in nature, driven by elegant visual concepts and poetry versus overt political statements.

Project: ‘Trapped in a moment’

For his project at CeRCCa, Cole Stenberg brought us to the 1990’s when Cal Marçal, used now as a storage space, was the home of a rare collection of birds and reptiles. On the stage, hidden behind the curtains, the visitors could find a darkened place that combined painting, light, sound and real birds, creating a mysterious landscape. The hidden part became a sensorial space shared by golden canvases, spider webs, old cages and the subtle singing of the birds.
As Cole says:

‘Atrapat en un moment (Trapped in a moment) deals with visions of entrapment and perceptions of freedom. In discovering these elegant aged birdcages hidden behind a curtain on the stage of an old theater in LLorenç del Penedès, Cole found the perfect objects to address the entrapment of a small village in Catalonia as well as the entrapment of being caught chasing a false American dream in Los Angeles. The village and the theater themselves were stunning, as is the lifestyle of the place. However, religious and economical issues leave the village lacking on many levels. Whereas in Los Angeles, the streets are a mess and poverty battles extreme wealth on a daily basis and people breathe in pollution and hustle without a moment of contemplation.’ 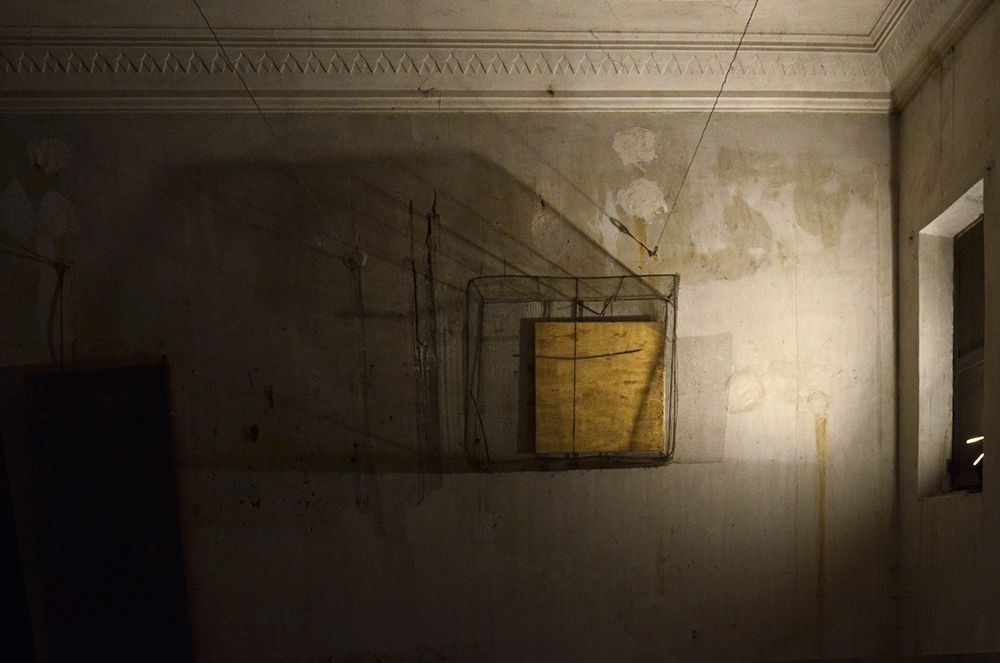 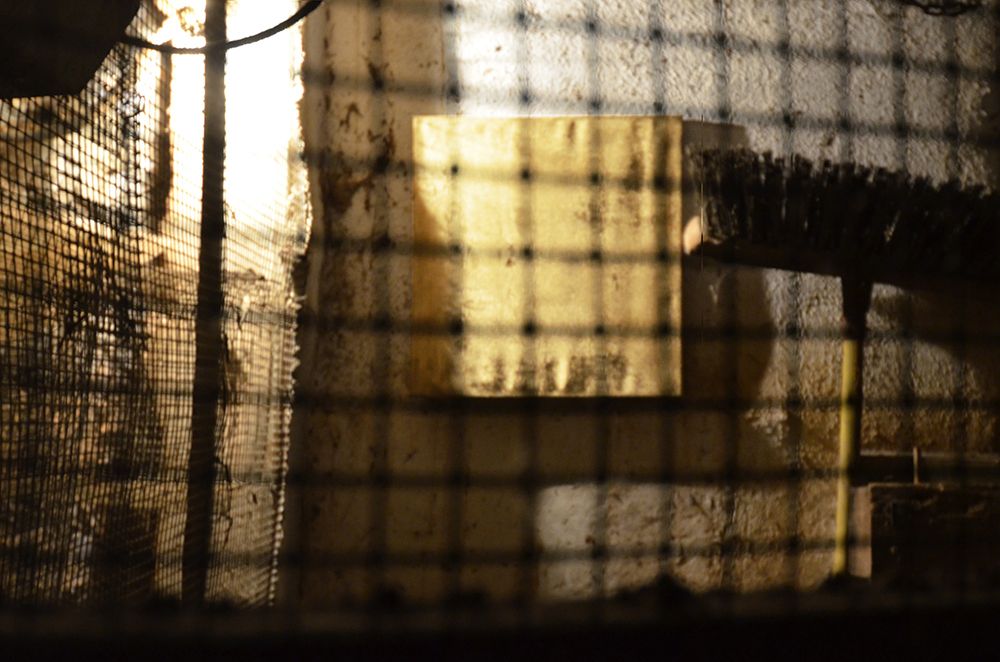 Lourdes Guillén Viñas (Llorenç del Penedès, 1988) has a BA in Art History and an MA in Advanced Studies in Art History from the University of Barcelona. She is currently researching for her MA in Arts Management at the Open University of Catalonia. She has previously worked at the Pau Casals Auditorium and collaborated with the Galleria Trama, in addition to working in the artistic department of the l’Orquestra Simfònica de Barcelona i Nacional de Catalunya (OBC). Currently she is working at the Cultural Center Caixaforum in Tarragona.

Noemí Navarro Herrero was born in Tortosa, in 1988. She has a degree in Art History from the University of Barcelona, and a MA in Arts Management from the Open University of Catalunya. She has worked in the auction house, Balclis Barcelona. Currently she is a part of the artistic studio Art Cinta Dalmau, and collaborates on the cultural section of the Diari de L’Ebre in Tortosa.

The documentary Cal Marçal, is the result of research done on the local history, and in particular the history of the café and cinema of Cal Marçal. Cal Marçal was a popular venue at the beginning of the 20th century.
At that time, the inhabitants of Llorenç del Penedès were divided between the three cultural centers they were attending. The cultural centers were el Centre Moral i d’Acció Catòlica, La Cumprativa and Cal Marçal. Cal Marçal was frequented by liberal landowners. The documentary is composed of interviews of different people that have been a part of the history of this old cinema. In the interviews, the subjects tell stories and share memories that have been silenced for a long time.

The project also comprehended research on the Marçal family tree and the recovery of objects and photographs from that time, revitalizing an important piece of cultural heritage of the village. 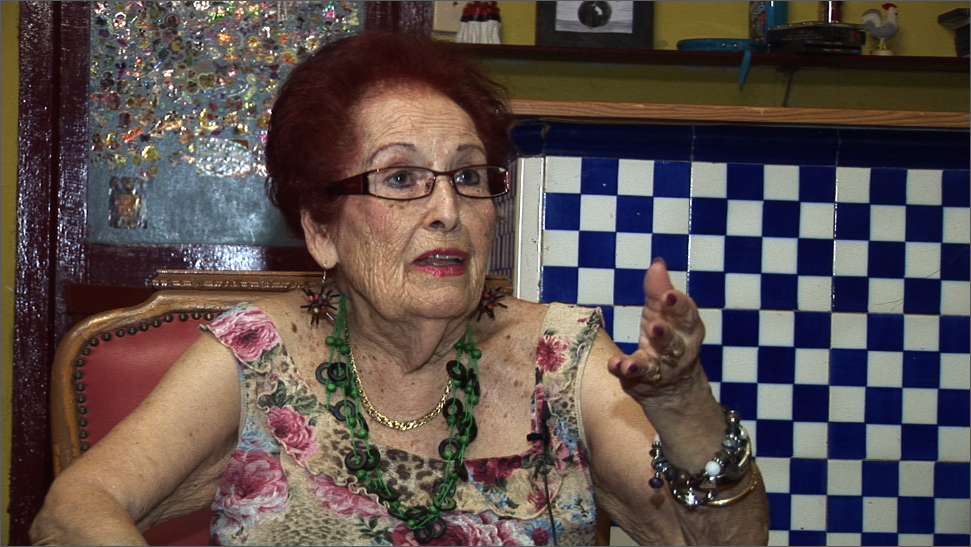 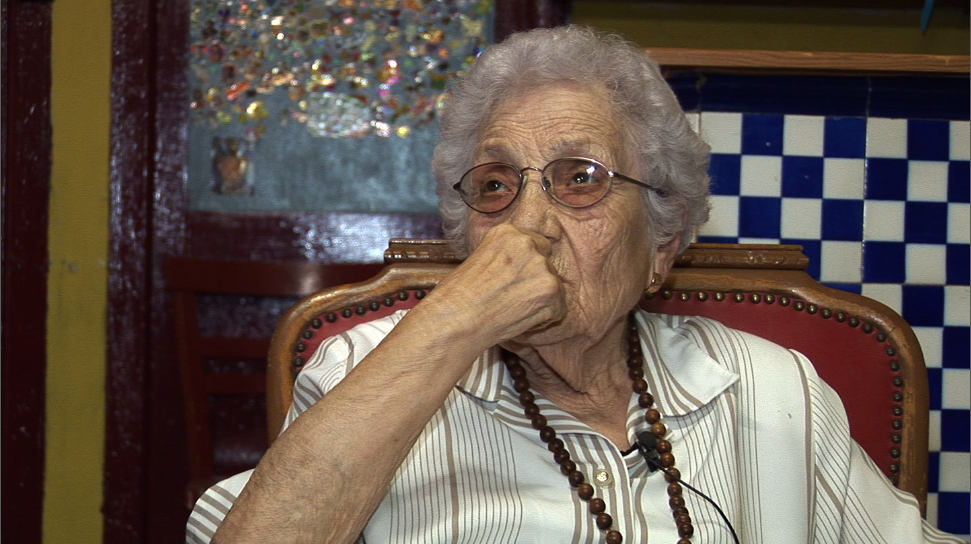 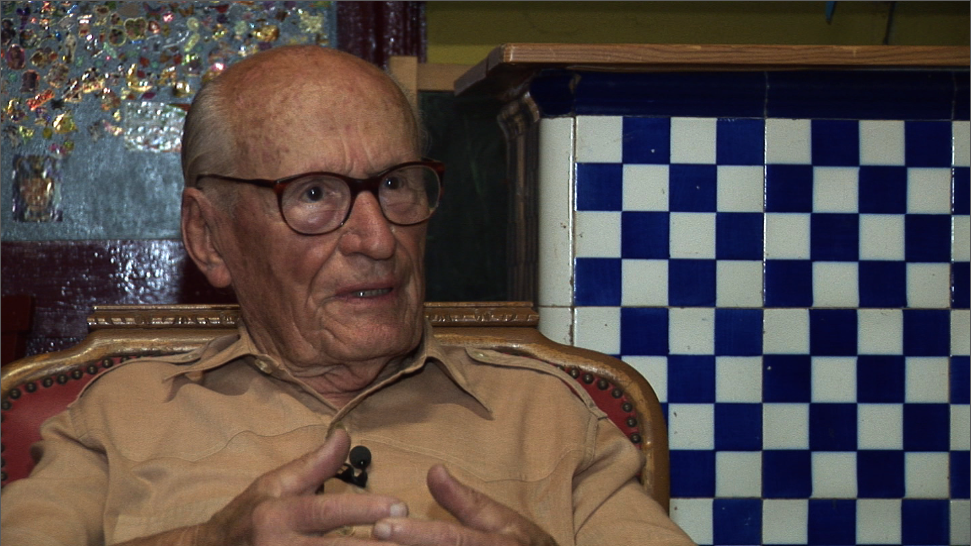