For the second residency of 2011, CeRCCa selected Ukrainian painter and illustrator Alexander and Irina Kudriavchenko, and Turkish writer and curator Sine Ergün. After their residencies in 2010, Antoine Berthiaume and Noilin O’Kelly came back to CeRCCa for a second residency to continue developing their projects. Utilizing an interdisciplinary approach, the artists proposed a dialogue between the short stories inspired by the city life of Turkish writer Sine Ergün, illustrations by Irina Kudriavchenko, neo-renaissance murals by Ukrainian painter Alexander Kudriavchenko and sound landscapes based on experimental jazz by the Canadian composer Antoine Berthiaume.

During the residency, Alexander Kudriavchenko participated in The Open Circle Workshop organized by the cultural association Sonaquet mous. He also did a presentation of his work at the Arsenal Contemporary Arts and Crafts in Vilafranca del Penedès, and a collaborative mural together with the students of the art school.

After his residency in 2010, Antoine Berthiaume continued his collaboration with Zoe Balasch with a second residency in 2011. Together they presented their project nAu now at CRA’P Pràctiques de Creació i Recerca Artística in Mollet del Valles (Barcelona).

As a result of a visit to Cal Rosal in 2010, and in order to further the research initiated in her previous residency, Noilin O’Kelly was selected for a second residency and had an exhibition as part of the Convent.0 Festival.

The public presentation of their projects took place in the gardens at Jiwar Creation and Society Artist in Residency in the Gràcia neighborhood of Barcelona coinciding with the Saint Joan festivities and the summer solstice.

Alexander Kudriavchenko graduated from the National Academy of Art and Architecture in Kiev. During his studies he focused on monumental painting whilst working in the studio of academician A. Storozhenko. There he became an expert on icon and mural religious painting, combining old tradition and avant-garde styles. Alexander is a member of the National Artist’s Union of Ukraine and has participated in several exhibitions in Ukraine as well as internationally. With his experience as a muralist, he has been commissioned to work in private houses as well as in orthodox churches in Ukraine, Russia, Serbia and Albania.

Inspired by traditional Byzantic, Italian and Old-Ukrainian sacred art, Alexander finds his own language through clear and bright figures full of humanity and symbolism, paying great attention to details, materials and technique. His paintings reflect both on challenging traditional methodologies as well as engaging with political and social problematics.

During his residencies at CeRCCa in 2011, and later in 2012, Alexander Kudriavchenko created several drawings and paintings based upon his interest in the influence that sound has on a person who creates and performs a musical composition. In relation to his research he participated in the two editions of The Open Circle Workshop organized by the cultural association Sonaquetmous, coordinated by Zoe Balasch and Olga Sola.

The Open Circle Workshop took place in Vilobí del Penedès in June 2011 and again in July 2012. The workshops were a space of experimentation and creation where the central axis was rhythmic and emotional training. Rhythm was perceived as the key to produce exchange amongst the 42 participants. The workshop was based on the theater technique of Jacques Lecoq, where an integral part was the interaction between disciplines and was directed by expert Ruben Segal, accompanied by musicians Jose Luis Saguento, Carlos Perez and Octavio Beltran.

Following his research on the relationship between music, movement and painting, Alexander created a 5m x 2.5m painting in collaboration with the participants.

The collaboration between Alexander and Ruben Segal, Jose Luis Saguento, Carlos Perez and Octavio Beltran continued one week later in CeRCCa. The four of them together with performer Zoe Balasch and musician Olga Sola, developed an experimental interdisciplinary performance piece.

Furthermore, during his residency at CeRCCa, Alexander Kudriavchenko did a presentation of his work at the Arsenal Contemporary Arts and Crafts School in Vilafranca del Penedès. The presentation was accompanied by a talk about CeRCCa and the phenomenon of artist-in-residency programs worldwide. Additionally, a workshop was organized by CeRCCa and delivered by Alexander. The workshop consisted on the creation of a big mural on one of the walls at the Arsenal Contemporary Arts and Crafts School. The mural was developed in collaboration with the local students. 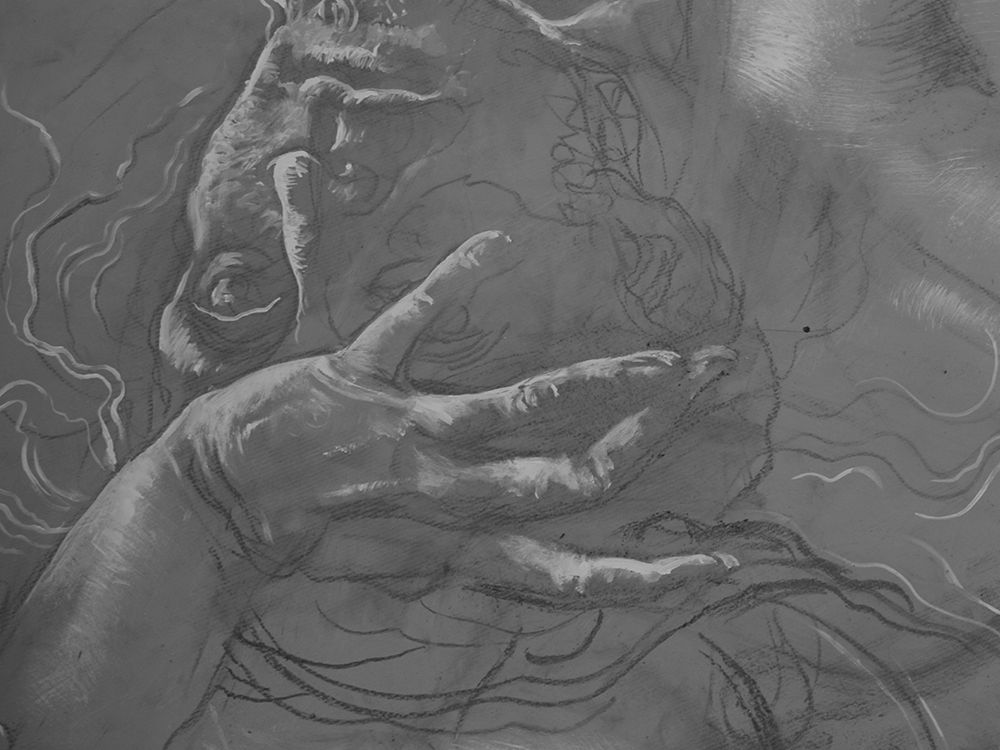 During her second residency at CeRCCa, Noilin O’Kelly continued her research on heterotopia and the uncanny. The research, which is apart of her PhD studies, involved an installation in one of the rooms of the Cal Rosal convent.

The site-specific installation used the imperfections of the space to empower a sense of fragility and secrecy. Noilin used an old bathtub filled with water and milk to project imagery that documented the performances Zoe Balasch developed in the space one year before. The bathtub was placed on the unnerving and unstable wooden floor of the room. Every time a person entered the room, the pressure from the body weight and movement made the floor tremble. As a result, the water and milk which reflected the image also trembled, causing the image projection to blur. Simultaneously, the image projection created its own reflection into the wall, upon which the movement of a person entering the room caused it to become impossible to decipher. It was only until the viewer stood still for a while that the whole installation could become clear.

The project then reflected on states of movement and stillness, creating a fragile and unsettling space that could only be made familiar and understandable when contemplation and no movement were achieved. 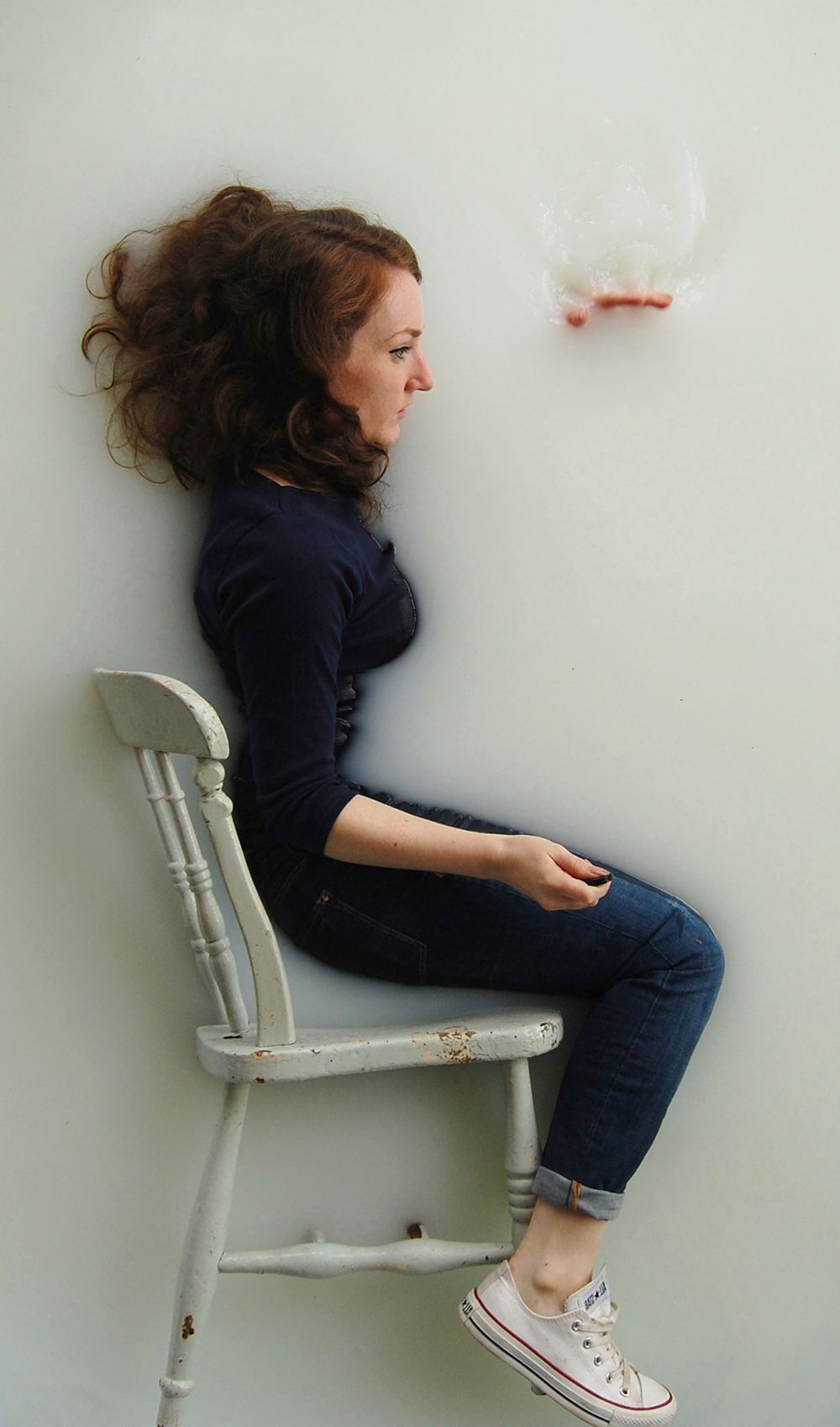 Sine Ergün is a Turkish writer, curator and director of Mau Mau, an interdisciplinary residency program in Istanbul. She has a BA in International Relations from Bilkent University, and a MA in Cultural Management from the Istanbul Bilgi Üniversitesi. She has worked for several editorial companies and was a research assistant at the Istanbul Bilgi University. As part of her creative practice as a writer She has published several short story books and has been awarded several prizes.

During her residency at CeRCCa, Sine wrote six short stories that reflected upon her experience at the residency and Barcelona. The short stories were illustrated by artist and designer Irina Kudriavchenko. As part of the event that took place at Jiwar Creation and Society, Sine and Irina printed several of their stories and illustrations that were then distributed to the public. Sine also developed a performative and participatory presentation of her creative process. The experimental workshop consisted of a multilingual composition in Turkish, English, Catalan and Spanish, created from the sentences that the participants wrote on pieces of paper which were inspired by Sine’s short stories. The different sentences were then projected onto a screen, and by means of the exquisite corpse surrealist methodology, a new shared story was created. 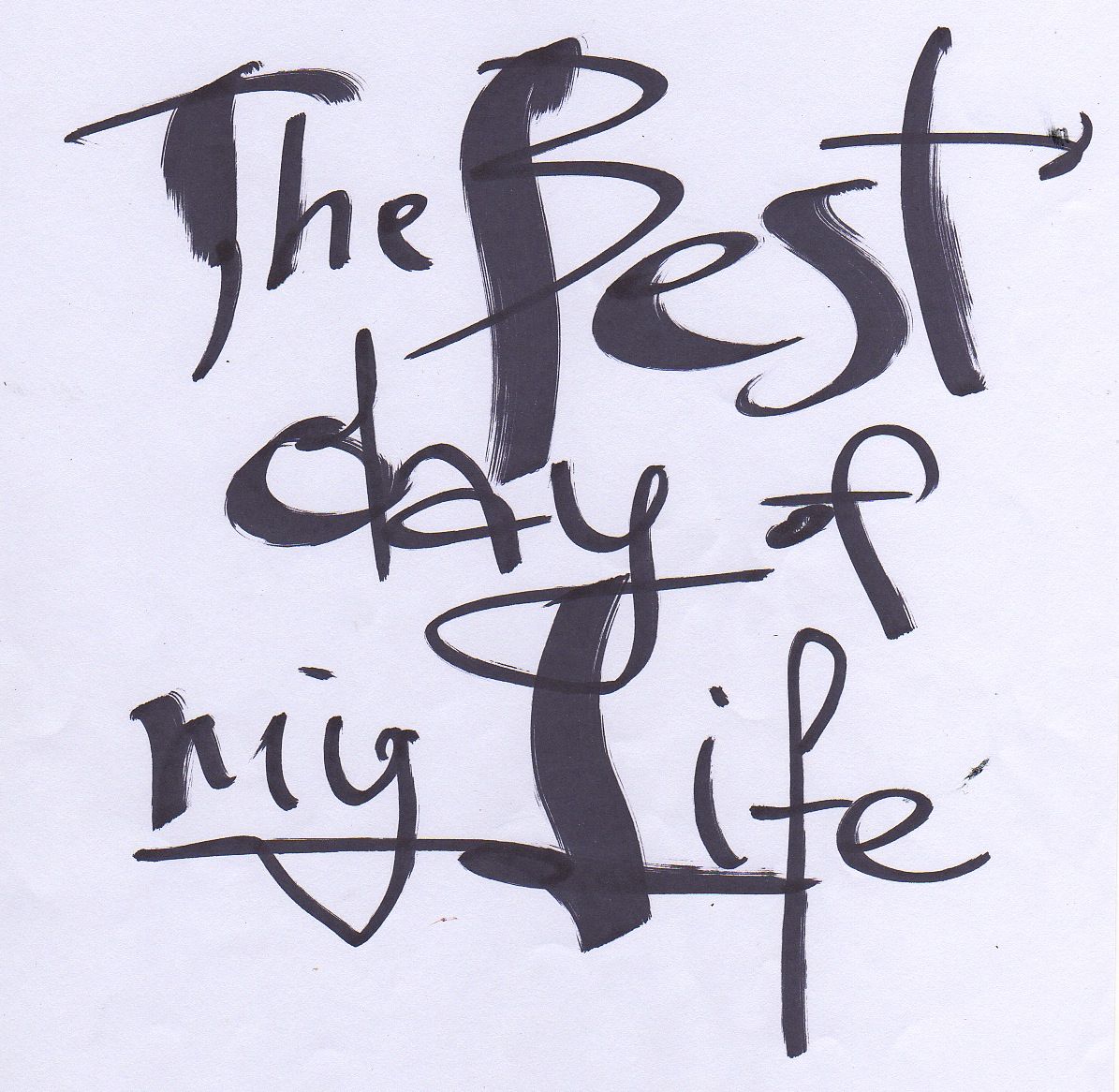 Montréal guitarist and composer Antoine Berthiaume has been active on the jazz and improvisation circuits for over 15 years. His work has recently been enriched by collaborations with well-known filmmakers and contemporary dancers. Antoine is a founding member of the western-folk group Rodéoscopique. He has been seen performing in Montréal with Pierre Tanguay and Michel Donato, with who he has recorded his first jazz foray for Ambiances Magnétiques Jazz. With grants from the Conseil des Arts et des Lettres du Québec and the Canada Council for the Arts, Antoine has furthered his skills in the United States, Japan and Europe. He is currently working on a PhD in electronic music at the University of Montreal.

Dancer, choreographer and researcher of body and dance’s shapes. Since 2004 she works as a dancer or choreographer participating in festivals in Catalonia, Bask Country, France, Denmark and India. She participes in many artistic projects related to body and territory and she collaborates with artists, architects, landscapers and geograhers. Usually she takes the opportunities offered by technology as a link to collaborate with sound and video artists. In 2011 and 2010 she recived the support of the Catalan Arts Council and two catalan art’s centers CACIS, Center of Contemporany Art and Sustainability and Nau Côclea for the Phase I and II of Parinama Project (dance and experimental sound) developed in collaboration with the sound artist Olga Solà.

She studied contemporary dance and performing arts in independent centers of Spain, France Denmark and India with deep influences of Bodyweather. She was awarded a degree in Social Pschicology by the Universitat Autonoma de Barcelona (UAB) where she also studied Dance Movement Therapy. As a researcher she is interested in Eastern philosophies and how the body is understood linking this research with postmodern studies of the body. Her education has been implemented by a training course in Hatha Yoga, Naad Yoga ( sound’s yoga) and meditation. Nowadays she links her artistic practice with teaching the discipline of yoga, meditation and dance as a way to explore the links between the body, the mind and the movement.

The project nAu now by Antoine Berthiaume and Zoe Balasch was developed at CeRCCa in collaboration with L’Escorxador, a cultural and social space of Vilafranca del Penedès.

Their work stemmed from several meetings in which the discussions and exchange of ideas opened up a dialogue for experimentation and improvisation, a mutual interest shared by both artists. For the artists, improvisation in dance is understood as the immediate translation of a sensation or a physical/energetic impulse in motion, all without passing through the logic of the mind. Regarding the music, the utilization of romantic sound landscapes created by string instruments, electronics and sound objects, opened the door for the interaction between movement and sound.

With the project nAw now, their aim was to draw attention so as to interact spontaneously and intuitively with the others, with sound, the surroundings and with anything else occuring. nAw now was performed at CRA’P - Pràctiques de Creació i Recerca Artística in Mollet del Valles, and was accompanied by a talk and discussion about the project. 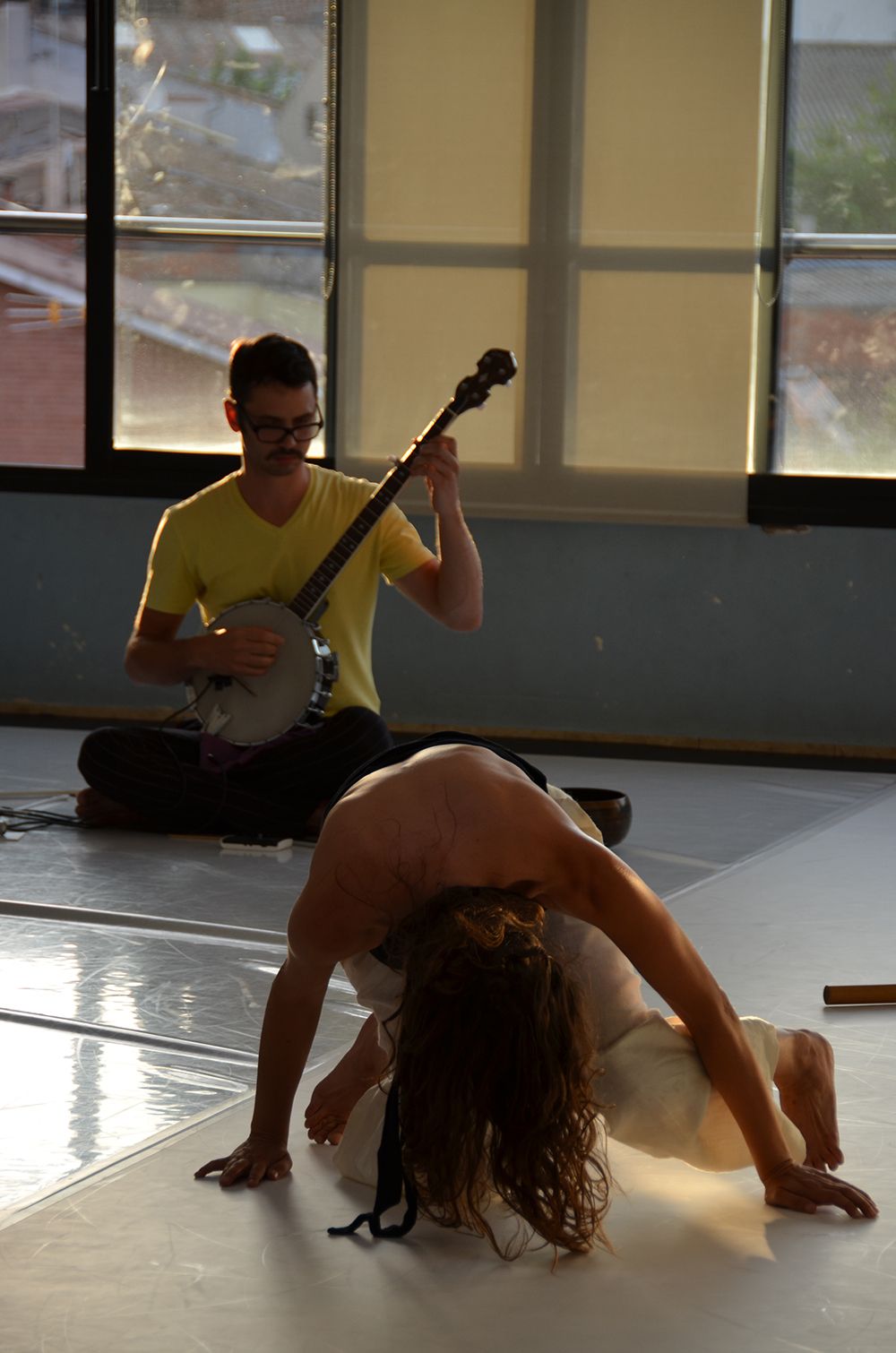