‘The actual order of things is precisely what ‘popular’ tactics turn to their own ends, without any illusion that it will change any time soon. Into the institution to be served are thus insinuated styles of social exchange, technical invention, and moral resistance. That is, an economy of the ‘gift’, an aesthetics of ‘tricks’ and an ethics of ‘tenacity'.

Cecilia De Souza resides in Ushuaia, Argentina from 2006. Her artistic practice moves between photography and painting. She is interested in challenging both mediums through embracing error as a way of discover that what is unconscious, the synthesis without representation of dreams. Her aim is to experiment with strategies that challenge the mandates of consciousness and to use metaphor in order to rethink the workings of discipline and its methods of representation. Cecilia De Souza work has been exhibited at Galeria Pera de Goma, Montevideo, Museo Fueguino de Arte2011:“20 años 20 artistas”, Museo Fueguino de Arte y Museo Marítimo de Ushuaia 2010 and Ushuaia. Primer Salón de Pintura de Río Negro2009: Bienal del Fin del Mundo.

During her time at CeRCCa Cecilia will work in a collaborative project were the medium of painting will taken as a self-discovery process more than a final product. Painting then will become a lived entity, a flux that will work as a channel. The aim is to understand the pictoric experience away from what is visible. The idea is to create a white cube (3x3x3) were the participants will interact with the space by curating an inside installation that will expand afterword with the cube itself through site-specific interventions covering the entire cube. The cube then will be deconstructed and will be exhibited unfold as a large collaborative mural painting. 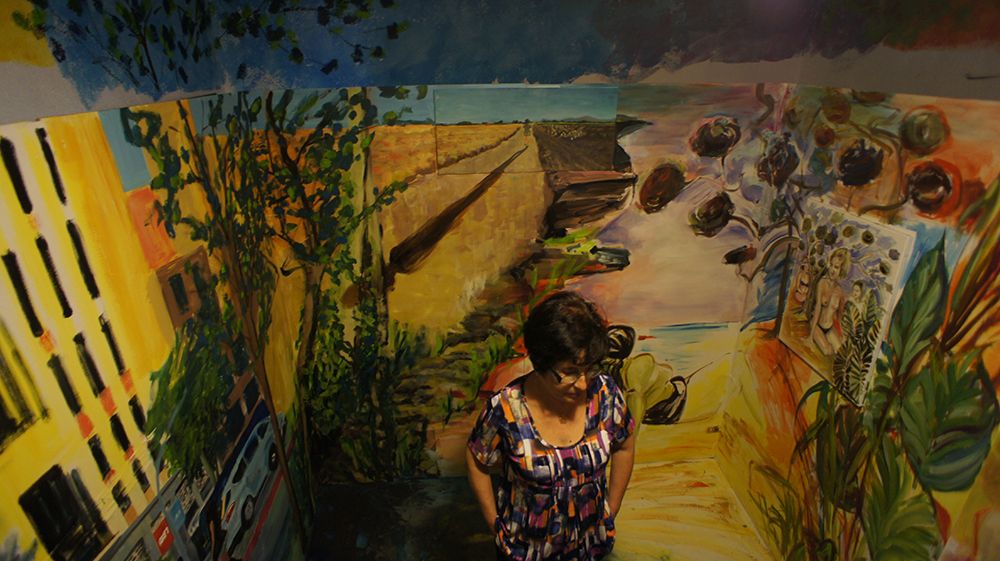 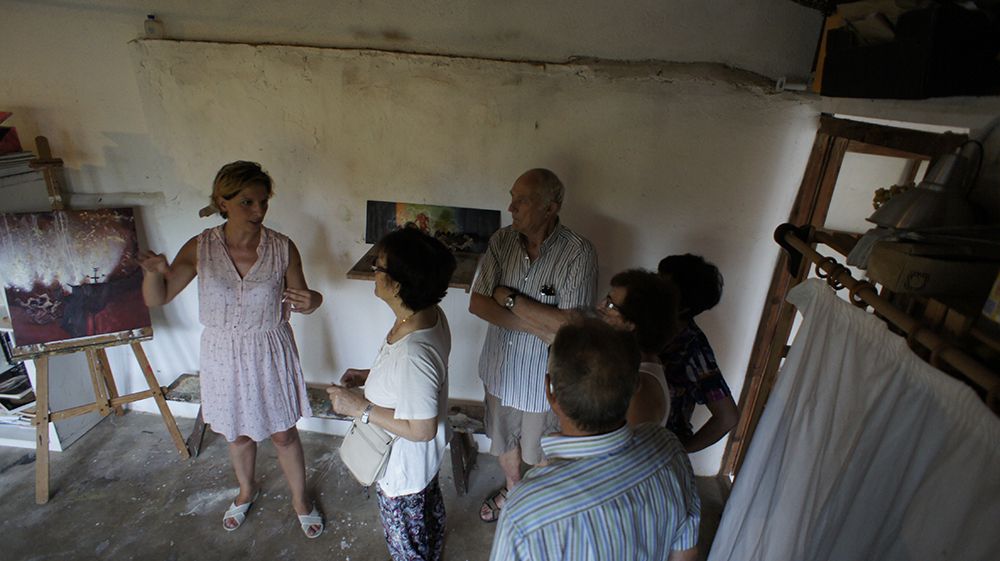 ‘I’m Julieta Quintero from Ushuaia, Argentina. I’m a translator, English and Spanish teacher. I’ve just turned 28 and this is my first BIO as an artist. I’ve been playing guitar for several years now. It started as a hobbie when I was in school while trying to interpret songs I loved during my teenage years. Later on, in my twenties, playing guitar would become a personal moment I had to express my feelings and compose music for words written on my diaries. I would never play in public though. Now I’m 28 and I’ve decided it’s time to share my music and accept new challenges. I’ve been encouraged by great artists in CerCCa to be part of this experience so I’ll take my participation in the residency as the start of my artistic career for future BIOS and projects.

My project is based on the composition of 3 songs in which I’m able to express myself as an artist relaying on the fact I don’t have to be perfect and that being an artist is about trying and being unique at doing so. Lyrics and music will describe my experiences during my first trip around the old continent in contrast with life in the village where I’ll be surronded by a natural environment and open to share my work with other artists. I believe that being quiet after changing cities and countries every 5 days will help me get suitable and more harmonious words to tell my stories’ 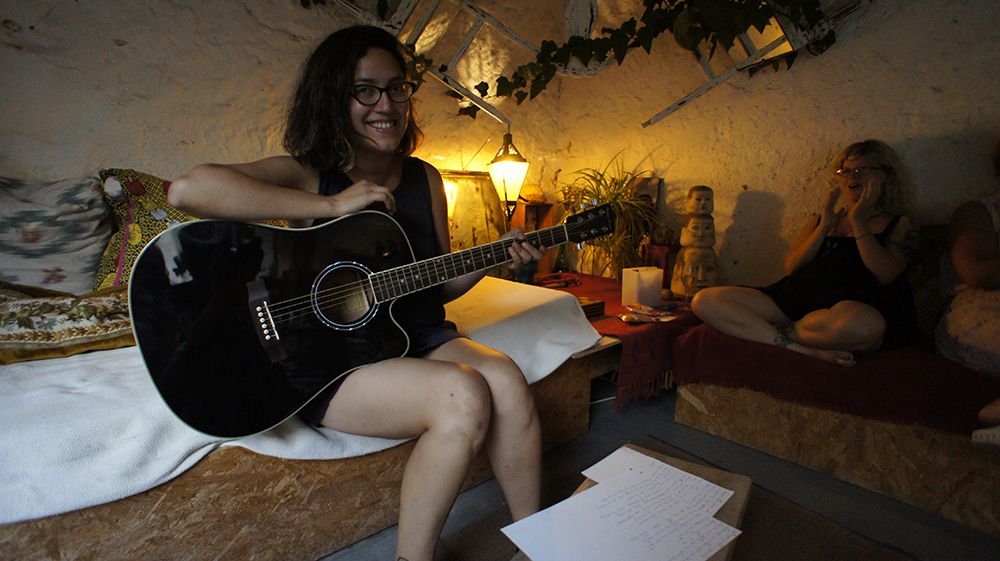 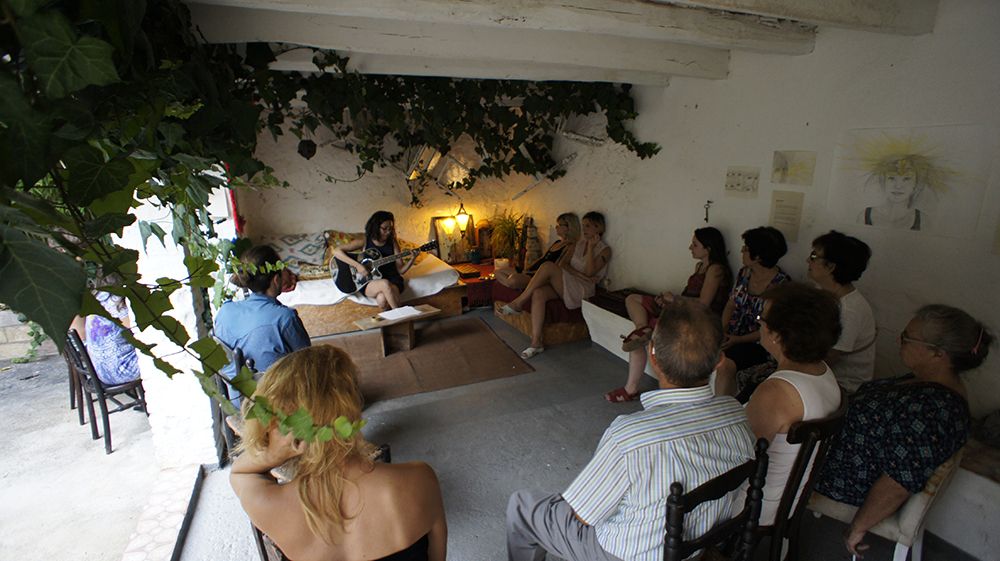 Colette Krogol & Matthew Reeves are dancers, choreographers, filmmakers, and teaching artists, who have been living and working in New York City since 2007. This August they moved to the DC area to earn their MFA’s in Dance at the University of Maryland. They hold a Bachelors of Fine Arts in Dance from the University of Florida and are the Artistic Directors of Orange Grove Dance, a multi-media dance company who creates athletic visual experiences through the lens of dance, film, and design. They have taught master classes and workshops, as well as set repertory across the United States and Europe. Their choreography and film work has been produced and presented extensively nationally and internationally with their most recent work being performed and exhibited in Finland, Iceland, Scotland, The Netherlands, and Israel. This past summer Orange Grove Dance produced and choreographed their third dance film THE ARCHETYPES, while their other two films (Rauma in Motion (Finland) and ELta Blö› (Iceland) were Official Selections at the Blue Sea Film Festival in Finland. Colette and Matt have a deep passion for creating art with and for the communities in which they immerse themselves. They find it vital within their creative process. They have been Artists in Residence in Jerusalem, Israel (2013), Skriduklastur, Iceland (2012), Rauma, Finland (2012), and Nikiski, Alaska (2008). They have had the pleasure of collaborating and working with Neta Pulvermacher, Mark Dendy, David Dorfman, Gabrielle Lansner, The National Yiddish Theatre, Diavolo, DanceTactics, as well as many other artists.

During their time at CeRCCa they will be working on ‘The Trinity Space Project: Experiencing Space Differently’. The aim of the project is to create a multifaceted space and time exploration of our personal experiences within LLorenc del Penedes. While in residency we will investigate and explore the unique people, landscapes, and historic buildings of the area through three different lenses: dance, photography and film. This will allow our work to be seen not just in the dimension of a single performance space but also in the present and past evolving dimensions of time’. 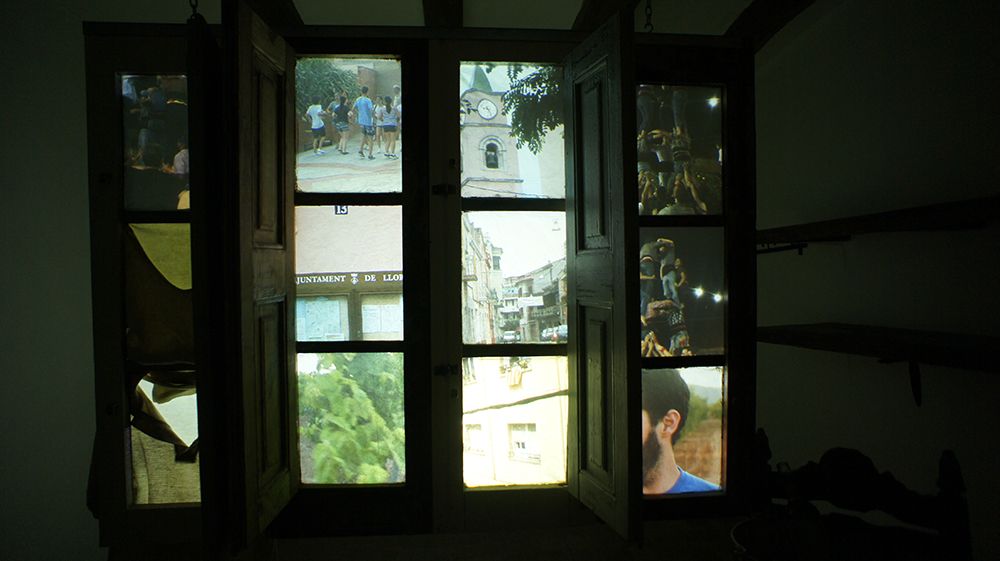 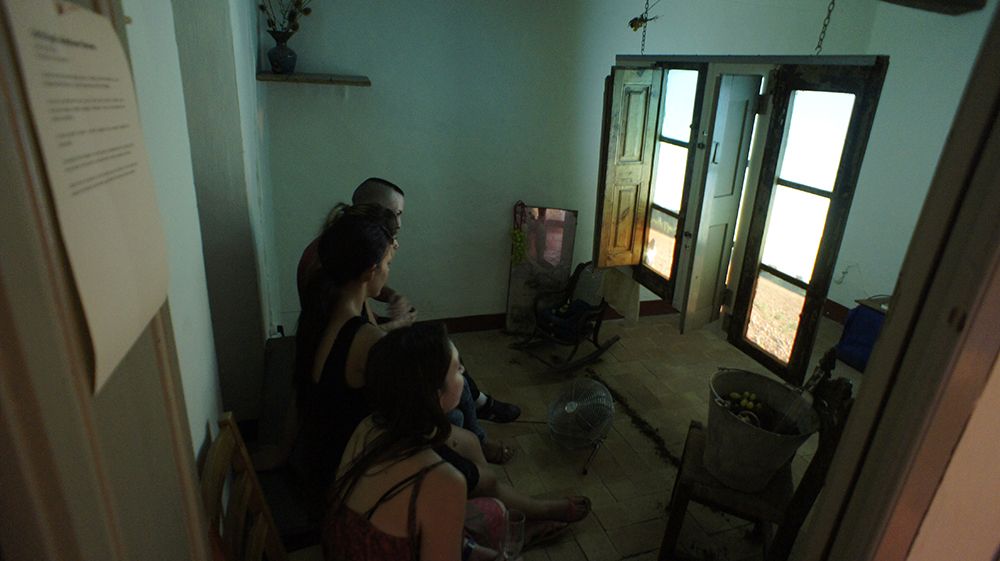 Adam Hanuljak received his bachelor degree from a Documentary film directing at the Academy of Performing Arts, Bratislava, Slovakia in 2008. In 2010 he graduated from a Science of Religions at the Faculty of Arts at Comenius University, Bratislava, Slovakia. Since the beginning of Hanuljak’s professional career he directed three feature films and several short movies. His movie About Young Parents 2 won an audience price at the One World Festival in 2012, Bratislava, Slovakia. In 2010 Hanuljak was one of the three founding members of non profit organization DogDocs, which aims on documentary filmmaking, audio-visual education and dance movies production. Since 2008 Hanuljak was collaborating with contemporary theatre companies from Slovakia on various video-projections. Since 2010 Hanuljak is working on a documentary feature film “Studio Matejka”, showing the creation of new physical theatre studio at Grotowski Institute, Wroclaw Poland. In 2012 a dance-movie Pearadise, (co-production of DogDocs and Studio Matejka, Grotowski Institute) won the best movie price at the Festival of independent movies at Los Angeles, USA.

During his time at CeRCCa he will finnish his writing projects and he will work on the scriptwriting of a documentary feature film. 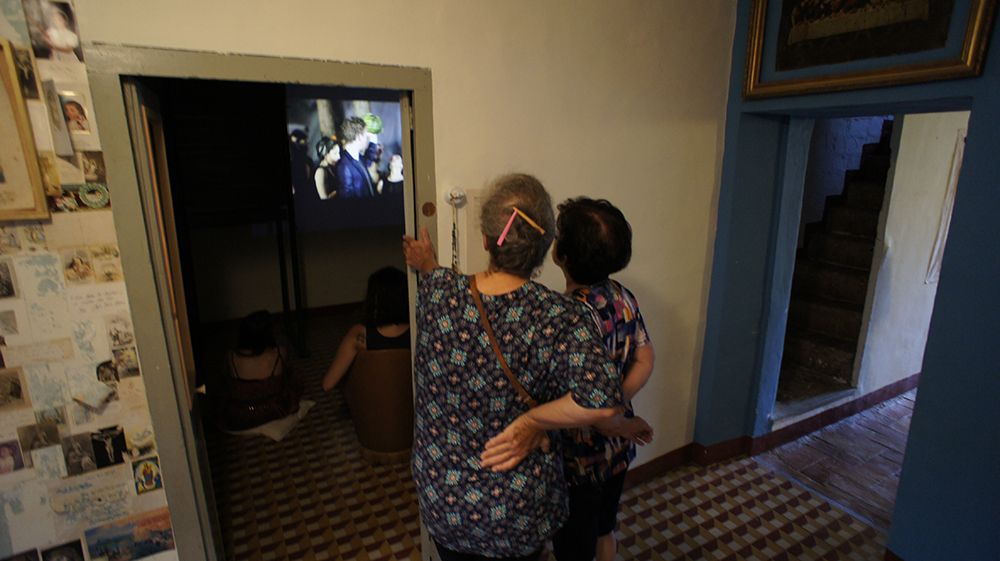 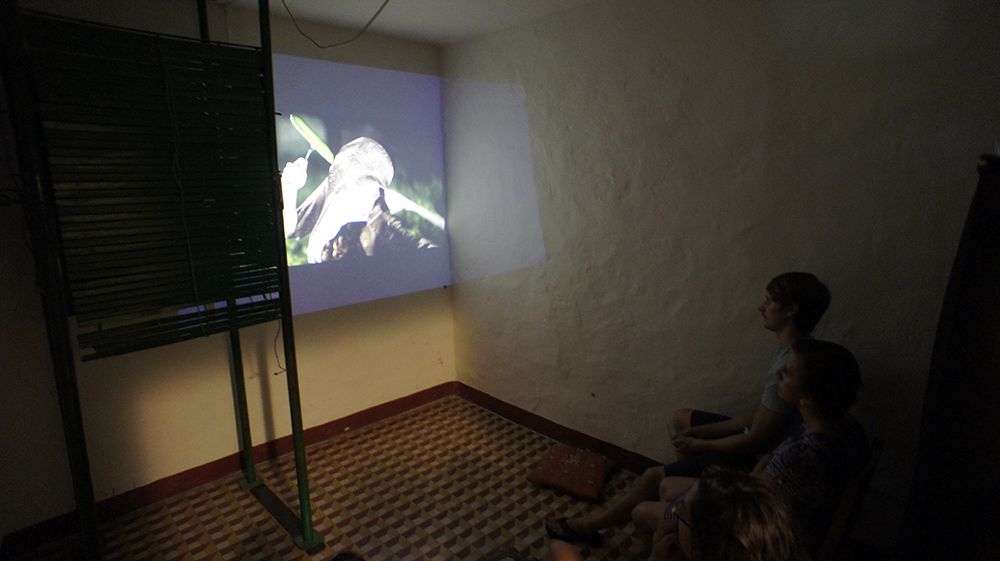 Natalia is a painter from Slovakia. During her time at CeRCca Natalia will paint inspired by what sorrounds her sketching and paint the place and people. The aim of her residency will be to use watercolour and acrylic to document with small paintings and drawings the domestic places and nature of Llorenc del Penedes. 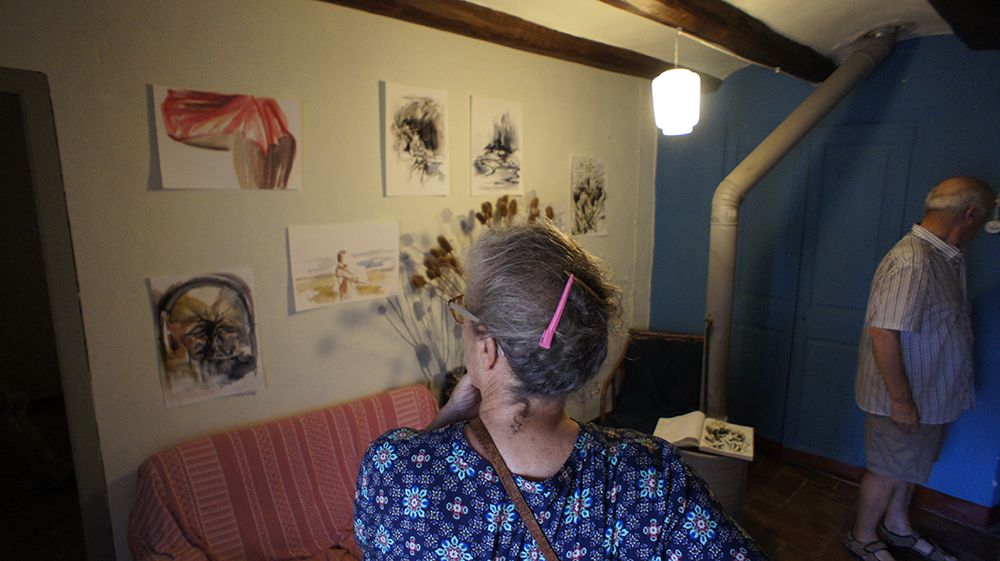 Alon is a writer, university teacher, and dreamer who teaches Religious Studies at the University of California, Davis. His true religions are football and bicycles. Playing, riding, writing books and articles about, co-hosting radio shows, and dreaming of them are among the things that make his heart sing. His books include The Global Game: Writers on Soccer (University of Nebraska Press) and Soccer in the Middle East (Routledge.)

During his month-long stay at CeRCCa Alon worked on his forthcoming book Faster than Al-Burāq: The History and Culture of Cycling in the Middle East. (Al-Burāq is the heavenly horse that carried the prophet Muhammad on his night journey from Mecca to Jerusalem.)

The book examines the varied connections between cycling and society in the Middle East and looks at intersections with religion, class, gender, and individual and social transformation. Colonial journeys, a vehicle of modernity and women’s independence, rides in the service of peace but also war, and a place in the literary imagination- these are some of the aspects of cycling in the Middle East that are explored in the book.

First appearing with European and American adventurers, missionaries and colonial administrators, bicycles gained popularity during Ottoman, British and French rule, their use encouraged in elite schools as embodying western ideals of progress. In the early decades of the 20th century they played, here as elsewhere, an important role as a vehicle for women overcoming patriarchal barriers and as a gateway for independence. National liberation movements emphasized, via political and athletic clubs and associations, the importance of cycling in fostering physical and mental health, building the “new man and woman” of the nation, and resisting foreign invaders. For over a century armies, resistance movements, and suicide bombers deployed bicycles but they also have long been a bridge between cyclists of warring nations. Influenced by political and social developments such as colonialism, the rise of modern political Islam, and globalization, bicycles have also shaped these developments. They have long captured the imagination of indigenous writers, artists and filmmakers who have incorporated them into their works and sang their praises.

Alon’s plan to organize a community event centered on this vehicle of personal and societal transportation and transformation did not materialize. He would love to return and bring to fruition a meeting of local cyclists who will discuss cycling in Catalunya (both personal stories and considerations of cycling in the region), and his own research on cycling and social change in the Middle East. A community ride is also planned.