During July and August 2013 photographer Monica Slavov from the U.S, architect and urban researcher Chide Adah from Nigeria, textile designer Orsi Csoma from Hungary and Yuri Boyko a photographer originally from Ukraine but based in the U.S were selected to be part of CeRCCa Residencies.

During their stay at CeRCCa Monica Slavov worked on two projects using analogue and digital photography as well as video to document her inner feelings and performances both in the studio and on the public space.

Chide Adah continued her on going research The Urban Built Environment and Sustainable Social Practices. The research included interviews to different architects and the participation at a workshop during the Barcelona Design Week.

Orsi Csoma worked on the design of different silk scarves using as inspiration and patterns the landscape surrounding CeRCCa. She also collaborated with local designer Pau Batlle. Some of her designs have been recently exhibited at the Santes Creus Monastery.

Monica Slavov, working under the name Monica Tolia, is an artist from the U.S.A. During the last 6 years she has lived in London, Bangkok and Vienna. She relocated to Barcelona after her residency at CeRCCa. As a result of her nomadism, experiences and observations, the theme of identity has become crucial in her work. Monica oscillates between work about her own identity, identity of the ‘artist’ and social, cultural and political identity, working in two avenues: internally and externally. She is a versatile artist, employing transmedial approaches with analog and digital photography, video, bookmaking, collage and drawing.

During her residency at CeRCCa, Monica engaged the theme of exploring individual identities through past experiences. Taking a documentary approach, she used the body as a representation of its history.

In the piece titled Confessions, she used the idea of tattooing to represent this. Tattooing was first discovered by rubbing ink into an open wound. So the artist took the body history and brought open wounds of the past onto the surface, represented in site-specific tattoos.

The second set of works, titled Contact, employed the aesthetic of silver-gelatin contact sheets, where the 35mm film negative strips were organized into a timeline of one year using one contact sheet/roll of film per month. Contact explores the breakdown of time, its passing, the deterioration and stripping down of the Self as the days, months, years go by. The unique relationship between time and the body is established once adulthood is reached, in that it becomes an oppositional relationship. Time moves forward whilst the body experiences a backward movement as it ages, deteriorates, slows down. The series itself and choice of aesthetic of sporadic snapshots against predominantly blacked-out days, represents the artist’s disillusionment with the passing of time and its effects on her body and mind, which she shows in a progression of stripping an item of clothing in each calendar month until reaching a natural and vulnerable state of nudity.

Chide Adah is a graduate in Architecture from the University of Jos in Nigeria. Her research focuses on the built environment and the consequences of this human activity on the everyday life of a given community.

During her residency, Chide conducted research on the urban realm of Llorenç del Penedès, and the causes and consequences of the construction boom that eventually triggered one of the deepest economic crises in the contemporary history of Spain. The Urban Built Environment and Sustainable Social Practices was developed using qualitative research, literature analysis, study fields in Llorenç del Penedès and in Barcelona, research interviews of Pau Batlle, an urban planner that was part of the team of architects that developed the infrastructures of the Olympic Games in 1992 and the 22@ neighborhood in 2004. Furthermore, Chide contacted different personalities related to her research field, as well as participated in a workshop on sustainability and public space intervention as part of the Barcelona Design Festival 2013.

Orsi Csoma was born in Budapest, and studied aesthetics and textile/surface design. She lived and worked in New York City and Como, Italy, where she worked in different design studios. She is currently working as a freelance textile designer between Barcelona and Budapest.

As Orsi says:
‘I had been planning to design scarves for a while, finding them a very personal clothing item, and also a statement piece which solidifies the transition between a picture and an everyday material which is fabric. This in between status attracts me a lot. Coming from a musical and textile background, I chose rhythm as the theme of my project. The residency gave me the opportunity to use the rich Catalan landscape as my visual reference. I was interested in repetition and difference, two phenomena found in the organic world. Places, habits and people constantly reappear, and repeat themselves in our lives. The exciting thing to me is to observe how these patterns of repetition are being formed.

During the residency I made tons of sketches and aquarelles, then I decided to develop a small coherent collection of five pieces. I was particularly fascinated by the ‘choreography’ of groups. For example one of my pieces grew out of a sketch about a group of black sheep seen at a farm and another one came from the observation of grids formed by the grape yards. During my stay I was introduced to Pau Batlle, a local architect and scarf designer, who together with the CeRCCa team and the other residents, encouraged and helped me develop my work.’ 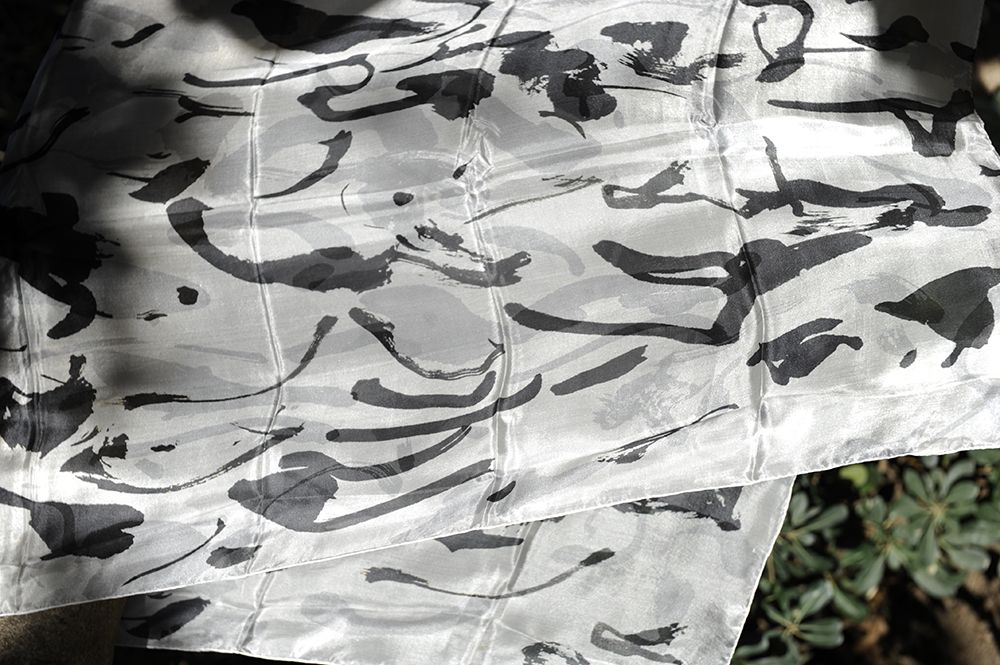 Yuri Boyko is a San Francisco-based photographer of Ukrainian descent. His artistic practice develops from his interest in deconstructing the different aspects of identity. Through his work, Yuri researches the concept of identity both as a development of the distinct personality of an individual as well as a social role within a certain community. Two of his most recent projects are Constructivism: A Man and A Woman and Immersive Identity. His work has been exhibited extensively in the U.S. and Ukraine.

During his residency at CeRCCa, Yuri developed a body of work inspired by the natural, social, and political contexts of the region with a particular interest in deciphering the symbols of Catalan identity in relation to the growing nationalism movement that Catalonia is experiencing in recent times. His project, Catalan Sketches, focused on the symbols of this identity through the foundational legend and social function of the Catalan flag: ‘la Senyera’. The Catalan flag is rethought in relation to different sites and situations that have marked the artist’s everyday life during his residency by using sites and situations that have a particular relation to the national psychology, its identity and history. The artist used form and color in order to create the subtle abstraction of these sites and situations. Catalan Sketches has the deconstruction of the shapes and colors of the Catalan flag as a continuous narrative element, and is ordered into four different thematic groups inspired by 4 different sites: the abandoned village of Selma, the Royal Monastery of Santes Creus, the Cal Figueres farm and different scenes of socialization in the city of Vilafranca del Penedès. These abstractions work as multilayered messages composed by the remembrance of a heroic past, the reflection on today’s multicultural society and an optimistic view of the future.

The final outcome of this intense creative period was twofold. On one hand his intention was to show a series of photographs that confirms a mapping of his idea of national symbology into the specific context of Catalonia. On the other hand he interacted with the local community by using projections on various surfaces in the village while the work was in progress.

This approach allowed Yuri to develop a dialogue with the local community, deconstructing the ideas of nation and flag as quintessential elements of patriotism.

During his time at CeRCCa he also worked in a series of photographs that he describes as follows:

‘In the summer of 2013 I was working on a series of photographs about Catalan culture, customs, and daily activities which later came out to present set of symbols of socio-historical fabric of contemporary life in Catalonia. I had a rigorous daily schedule around the main project: location exploration, shooting of raw material, developing idea by combing through and trying out acceptable and most expressive visual languages to build the narrative, post production, and engaging local community into dialog with images.

The awareness of the surroundings was heightened. But sometimes I’d stumble on clues of a different nature pointing to something outside boundaries of my concentrated and focused engagement. Whether it was dry long-stem wild flowers matched with an African drum as their vase, or wire birds on the wall brought to life by sun rays striking through the window, or elongated smooth one-piece bare wood pitchfork leaning against tapestry of inviting round logs, or grubbed out grapevine roots slumped tightly together by dusk, these split second piercings through the veil of mundane would bring in a realization of tranquility and existentialist sensation of the heavenly.’ 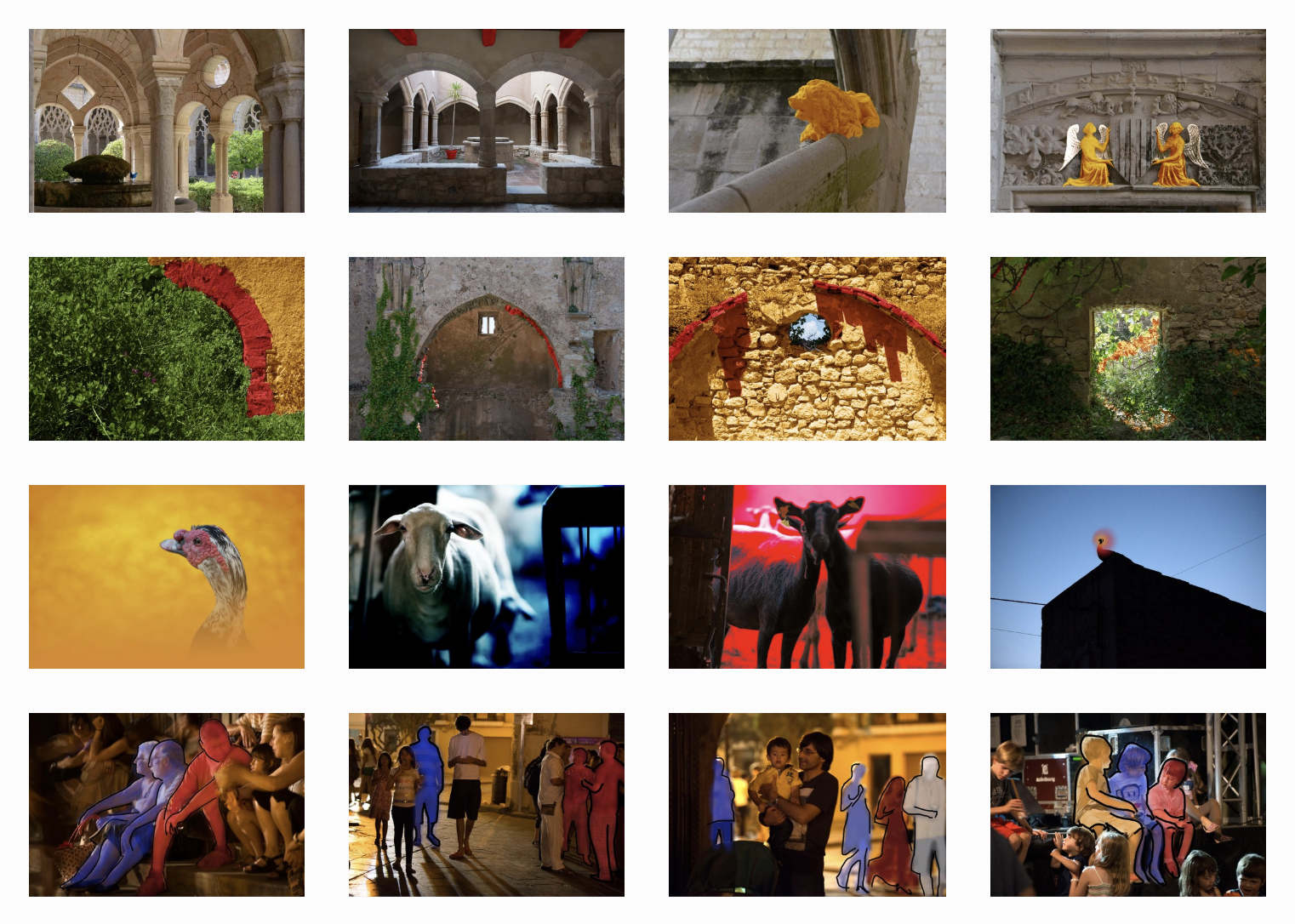